If you're like me, you were disappointed when NASA cut their human space flight program. No longer could children and adults in dead-end jobs dream of someday walking on the surface of the Moon or drinking floating globules of water through a straw. Homo sapiens as a species are still making it up there, but I will never be one of the chosen ones.

Luckily, I can enjoy all of the excitement of a liftoff, the tedium of multimillion kilometer orbits, and the angsty terror of Moon landings from the comfort of my beanbag hammock.

Kerbal Space Program is a new video game with a true to life physics engine. The game is still in alpha development, but the aspiring cosmonaut will find everything he/she needs for full Moon mission simulations! Everything from gravitational pull to the galactic disk splashed across the "sky" (sky becomes a limiting geocentric term in a universe with no discernible compass rose) has been taken into account.

Come along while I walk you through the steps to completing your own Apollo mission.

When you start up the game, you'll be brought to a field with several buildings. Click on the one labeled "Vehicle Assembly Building". This will bring you to your lair of experimental rocket awesomeness.

I won't go through every detail, because most of the fun comes from designing and testing your own rocket designs. However, there are some minimum requirements for a possibly successful launch.

First, choose your command cockpit. This is where your crew will fret over their impending destruction. 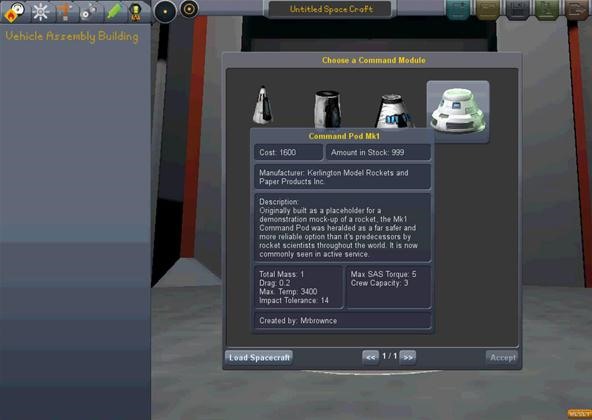 I prefer to use the rightmost cockpit, as the others are designed for space planes.

Once the cockpit is selected, browse the parts menu on the left of the screen. For the most basic rocket, you will need at least one fuel tank and one liquid fuel engine. If you want to get into space, you will want many more engines and tanks. You can also add winglets and fins to help stabilize the rocket as it tears through the atmosphere. 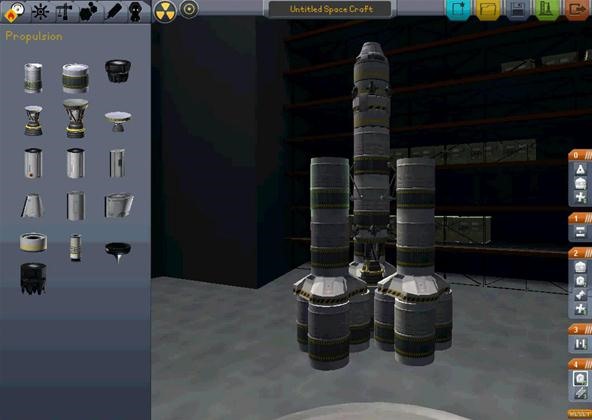 Add an "SAS" module to your ship to computerize stability control. Just like the real NASA, you will be trusting your life to a computer.

As a side note, I have been wanting to mount hobby rocket fins on servos and use tilt sensors and an Arduino to automatically adjust the angle of the fins as the rocket takes off. The automatic SAS system portrayed here looks a lot like what I would expect from an Arduino and servo setup.

To escape Earth's orbit, a space vessel must travel around 365 kilometers per second! You will need to take the weight of your space ship into account and test different amounts of fuel vs. weight. Additionally, most of the physical atmosphere is compressed in the first 30 or so kilometers of atmosphere making takeoff the hardest part of any moon mission. 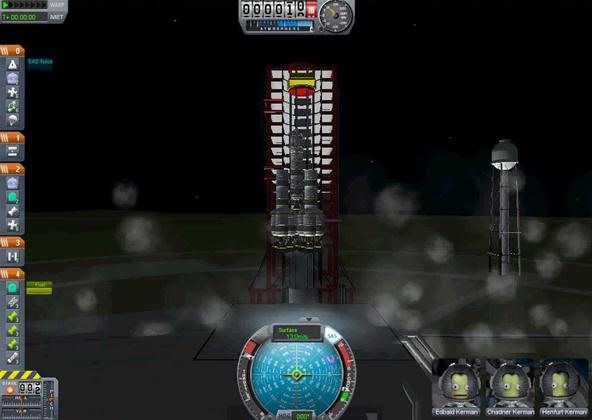 Do not be discouraged if your first five rockets just blow up on the launch pad! The game is realistic and rocket science is hard.

Step 3 Getting to Space

You will have to make it through several layers of atmosphere to break out into open space. Because the first layer of atmosphere is the thickest, you want to reserve your most powerful rockets for take off.

Look at the indicator at the top middle of the screen to see where you are in relation to the atmosphere and outer space. If you see video from a real space shuttle mission, you'll notice that the vast majority of fuel tanks are used up in the initial launch. Solid rocket engines are a good choice for the first stage. These work just like a normal hobby rocket engine you can use at home. Solid fuel rockets have solid propellant that burns at a constant rate. This makes them good for quick powerful bursts of speed. 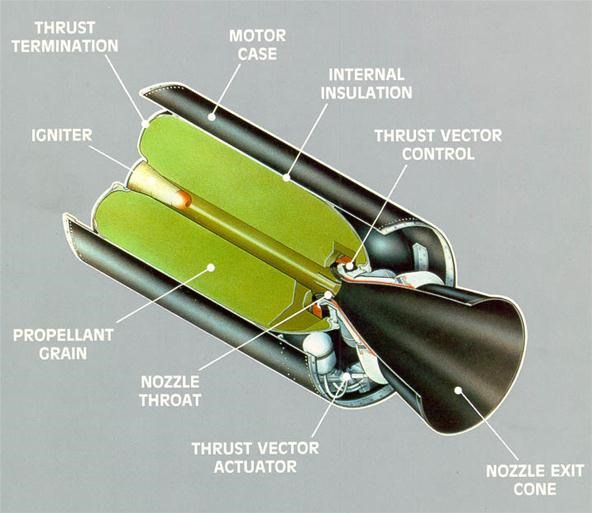 Notice that the solid fuel rocket can be controlled directionally, but the igniter sets the entire payload of fuel alight in one go.

Be sure to turn on your SAS computer controllers by pressing the "T" key! A spin out in space is manageable. On the launch pad it will almost certainly be deadly.

Orbit is a pretty crazily awesome thing. Gravity while weak compared to other forces, is much much stronger than individual whim or will, and to bend it, thusly we need a plan.

Isaac Newton was the first to figure out what the deal with the moon was. Basically, he determined that when, say, a bullet is fired, it falls vertically towards the earth at a constant rate. However, because the Earth is curved, the faster the bullet travels in the horizontal direction, the longer it has to fall before it reaches the ground. This is the essence of orbit. One simply needs to accelerate an object so that it travels just fast enough to fall around the entire earth. This is why we need to get so high up out of the atmosphere to get into orbit. It is a lot easier to gain that speed without friction from the air in the atmosphere.

When your ship climbs up past the atmosphere, you will need to orient it along the galactic plane. 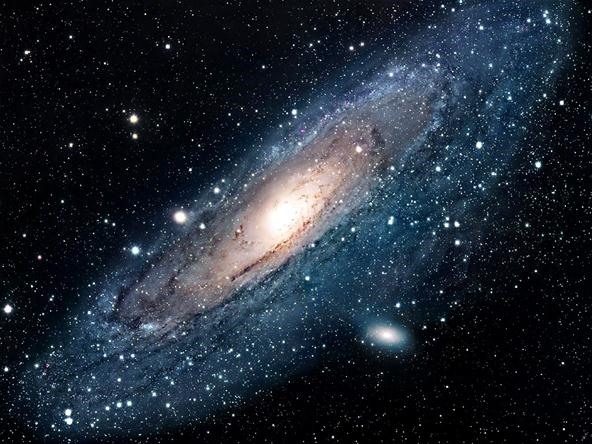 Our solar system is comprised of a sun and planets that all move around in circles on a single plane. For the purposes of planning a trip to, say, Mars, the rough guesses can be done in just two dimensions. Likewise, the galaxy exists as a plane. The Milky Way seen from Earth is a cross section of the galaxy, a sideways dinner plate full of burning plasma.

In the world of Kerbal Space Program, the galaxy, Moon, Sun, and Earth are all on the exact same planes. This means that we can use the Milky Way to orient ourselves along the galactic plane and achieve an orbit that gets us close to the Moon. 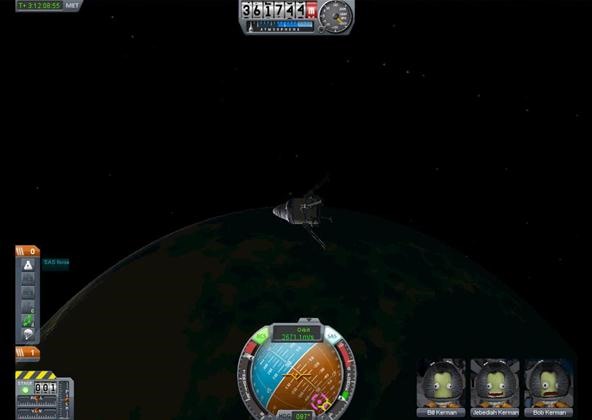 If you need help visualizing the path, we are moving from the center of the dinner plate in a spiral fashion until we reach the outer edge where the Moon is. If we started in a vertical spiral going above and below the plate, we would have an almost impossible time reaching a certain point on the edge of the plate.

Now that we have reached space, and oriented our ship along the galactic plane, it is time to hit those rocket engines! Put the throttle all the way up while facing in the direction you wish to circle the Earth.

Press "M" to bring up the solar system map and see your flight trajectory. For the first section of your flight, your trajectory will bring you crashing back into Earth. As you accelerate in the upper atmosphere, you will notice the arch widening until you trajectory shows you falling all the way around the Earth. 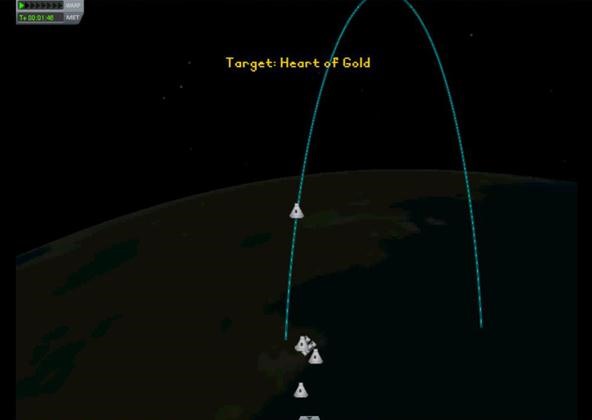 Once you have achieved an orbiting trajectory, you will notice two markers along your projected orbit. One is labelled "Apogee" and one "Periapsis". The apogee is the point in orbit when your ship is farthest from the surface of the Earth. Conversely, the periapsis is the point of orbit closest to the Earth. 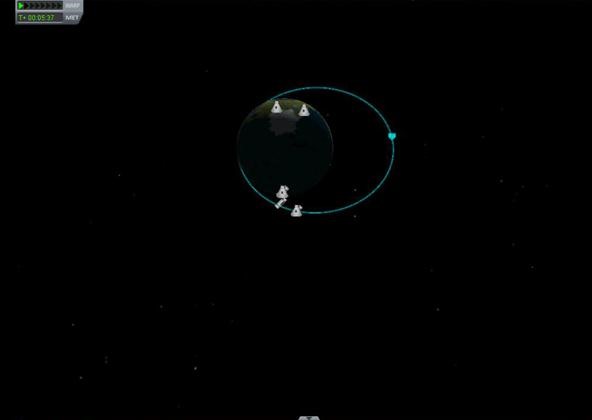 We can use these points to orient ourselves in out larger orbit to the moon. Chances are your Earth orbit is slightly elliptical, that is not perfectly circular. This happens when there is a discrepancy in the speed and angle of the orbit.

We will take advantage of this ellipticalizing effect to travel the vast distance to the Moon. Rather than use our rockets to directly break the gravitational pull of the Earth, we will slingshot around the Earth and use its gravity to hurl us at the Moon.

To save the most fuel, turn off your engines until you near the periapsis. Just before the periapsis, burn your rocket engines at full throttle. If you go to the map view at this point, you will notice the elliptical orbit lengthening out towards the orbit of the moon.

Step 6 Getting onto the Moon 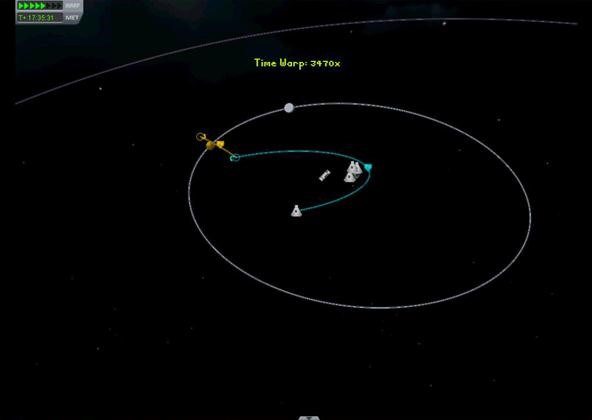 Now comes the second most dangerous part besides takeoff—landing on the Moon. Landing on the Moon is actually much harder than landing on Earth. While Earth has more gravity, it also has a helpful atmosphere to slow our decent. The Moon has no atmosphere and all our inertia is the sole responsibility of the rockets and fuel we still have left at this point. 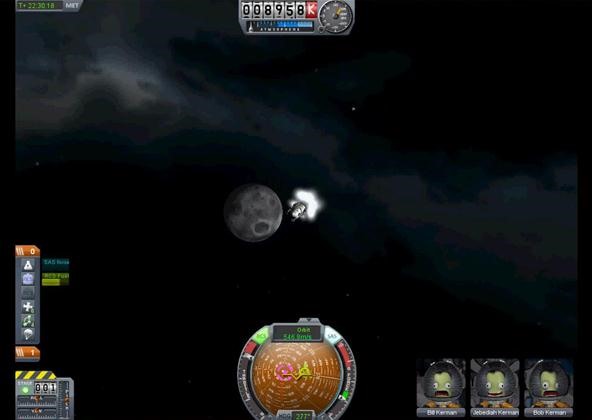 If you included landing gear on your rocket, this is the time to deploy it. You will still be traveling slightly sideways by the time you get to the surface, don't be shy about staying just a few inches above the surface while your horizontal speed decreases.

This is pretty much the only time that the game is not as fun as real life Apollo missions. You can't jump around, hit golf balls, or perpetuate harmful insular nationalism. You can roll your lunar capsule around the surface, but at the moment there are no Moon rocks or Mooninites to carry back home.

Unfortunately, I keep hurtling off into the deep void of space when I approach the Moon, so I have no pictures.

You will need at least half a tank of rocket fuel to get back to Earth. Using the same technique we used to orient our Earth orbit, go into orbit around the Moon and accelerate when your ship is on the far side of the Moon from the Earth. This will increase the elliptical shape of the opposite end of your orbit bringing you closer to the Earth.

While the game itself is still in alpha, it has the capability to give you a realistic full Moon mission simulation. I should mention that the mission to the Moon takes multiple days in real life and in the game. However, unlike real life, we have a handy fast forward button on the top left of our screen. If you are curious about the total mission time after your flight, the stats pop up on your screen automatically at the end.

I haven't had as fun a time playing an alpha video game since Minecraft! The realistic physics and spaceships make the game downright addicting. Here is a video of my return to Earth landing. I got a little caught up showwing off the landing gear.

Time to get to Kerbal Space Program and start your own cosmonaut mission! What will you make? A moon lander? A permanent space station? A sun-diving suicide bot? Let us know your thoughts in the comments below. If you have any questions, please feel free to post in the forum. If you have a kickass spaceship or Apollo mission video you would like to share, do not hesitate to post it on the community corkboard!

Great game, I play it about 6 months and I never get bored :-)

Ya it is very addicting.