Since the rise of private property and industrial production, modern capitalism has been on a undeniable crash course with Mother Nature. It's no so much that we'll end up murdering the entire planet, but just that the planet will quietly smother us with a pillow of famine, heat, cold and hurricanes. We over-farm land and replace the nutrients in the soil with oil. To package our oil-based produce, we wrap them in synthetic oil-based plastics, soon to be discarded in a trash heap or ocean.

However, Mother Earth sometimes turns a kind eye on her attackers and graces is us with a ridiculously useful plant, animal, or fungus to enslave to our own ends.

Researchers working in the Ecuadorian Amazon have isolated several species of fungi and bacteria that can actually metabolize plastic! These crazy critters can live at the bottom of a trash heap with no air at all, happily munching away on polyester polyurethane plastic. 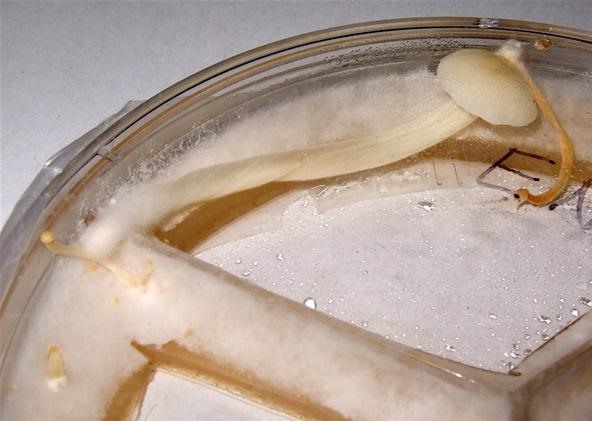 Plastic is made up of extremely stable carbon to carbon bonds. The process of turning petroleum into plastic creates long chains of monomers bound together by these carbon bonds. Our magic fungus sustains itself by breaking up these bonds and metabolizing the freed carbon.

The study examined 20 different species of bacteria and fungi that all exhibited the ability to break down plastics. The picture below shows a sample of some of the most active decomposers after a two week test period.

The most active decomposing fungi, Lasiodiplodia, ate away a full 8 cm of plastic in just two weeks. In the image above, the metabolized plastic has turned clear, while the untouched plastic remains white. Below, the lines in the graph which slope downward are the most effective plastic decomposing fungi.

On a side note, it's good to know that such ground breaking research is done with improvised tin foil stoppers...

While the findings are certainly encouraging, future studies will have to be done about the possible ecological impacts of introducing swarms of these spores into the world's dumps. Even then, the realities of capitalism will preclude a universal implementation of magic plastic-eating spore powder. The discovery does bring us hope for rolling back the ecological crimes of the past, after we get the consumption of the present under control.

Imagine one day, having household microbial plastic composters! I suppose our next step as mad scientists is to find some samples of these fungi and make our own homebrew plastic compost!

Share your ideas for putting these fungi to work on our forum. Share your personal compost ideas and projects on our corkboard. Sharing is caring and even more so with scientific knowledge.

Fascinating read! I love the idea of everyone having a homebrew plastic compost tot take care of all our waste. I wonder how long it'll be until they can farm this bacteria to the necessary scale...

But my compost box is made of plastic! Do I need to switch to aluminum?

My compost is plastic, too!