I finally got around to trying out another one of Will's mad science experiments and found out that this one was actually more satisfying (and less frustrating) than my slightly uncooperative jar jet. There's something very pleasing about making potassium nitrate at home in the kitchen and then watching the transformation from semitransparent liquid to spiky, frozen crystals. That was the best part for me, second only to igniting it with its sugar companion.

Following the directions from Will...

I gathered all of my necessary ingredients. Glass jars, salt substitute (with potassium chloride), instant cold packs (with ammonium nitrate), sugar, coffee filters, water, tin can, and a scale. My scale was a digital postal scale that measured in either ounces or kilograms. I also used a few plastic measuring cups to get the right amount of potassium chloride and ammonium nitrate. 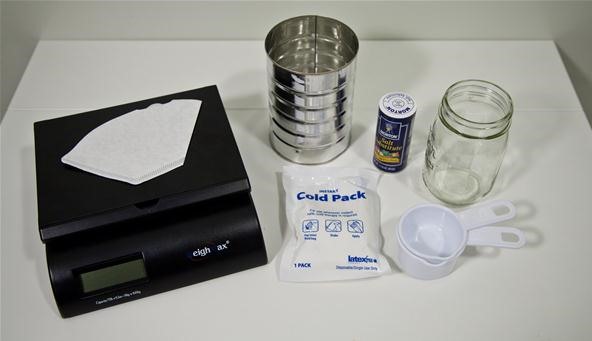 I got my instant cold packs at Target in the bandages section. It's their own "Up & Up" brand that does contain ammonium nitrate crystals. So, if you're having a hard time finding the right ones, if you've got a Target nearby, that's where to look. Although for some reason, they do not sell them on their website. I wonder why? 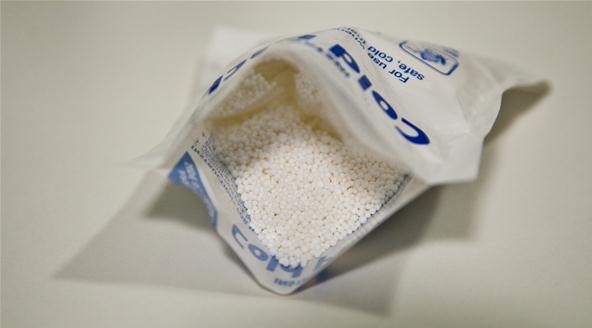 After carefully cutting the package, I measured out roughly 0.04 kg (40 grams) of ammonium nitrate. My plastic cup was about 20 grams, so I hit 0.06 kg on the scale. After that, in my second cup, I measured just under 0.04 kg of potassium chloride (salt substitute). Just under because I saw that others, like Nurd Rage, were fond of using 37 grams instead of an equal 40.

Then, I poured 100 ml of water into a measuring glass, dumped in the ammonium nitrate, and mixed it together with a wooden chopstick until it was fully dissolved. Next, I poured the salt substitute into my tin can (and old coffee can), placed a coffee filter (how appropriate) on top, and poured in the watery ammonium nitrate solution.

Next up, I dissolved the salt by heating the tin can on my stovetop at a low temperature until the liquid was without any lumps, mixing it with my chopstick. 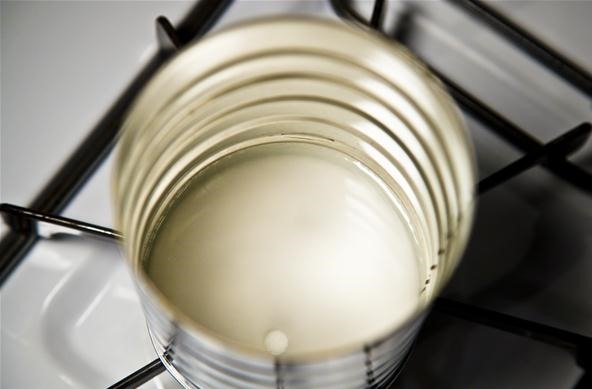 Once it was ready, I transferred it over to my glass mason jar and threw it in the freezer. 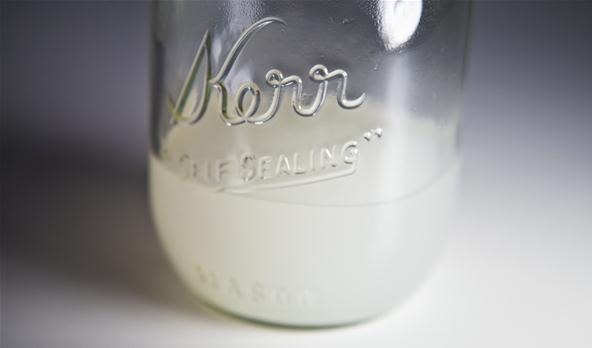 After waiting a couple of hours, I pulled it out and was amazed at the crystals formed at the bottom of the glass jar. 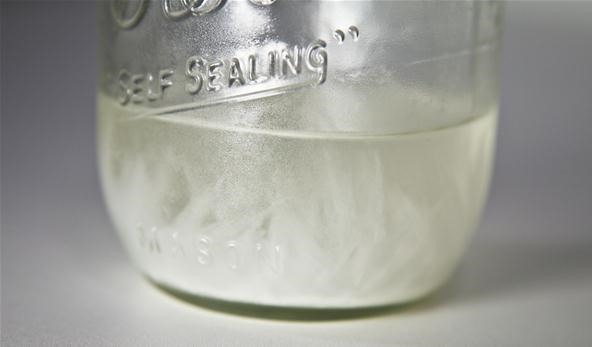 I then poured out the remaining liquid (ammonium chloride) and let the potassium nitrate dry. 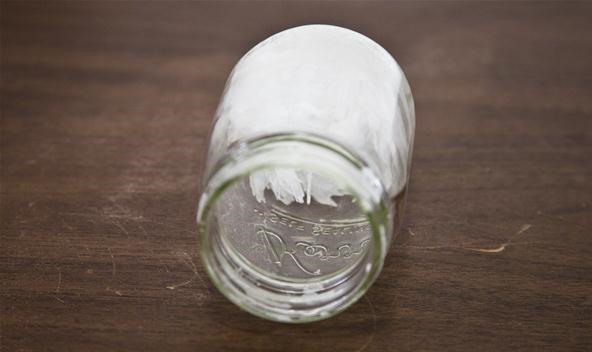 Again, this was my favorite part. I just wish I had a macro lens to take some better closeups of the mushy crystals at the bottom of the jar. Will mentioned to me that the longer the jar is in the freezer, the bigger the crystals will get. Next time, I'm trying that out. But not before finding a good cheap (or homemade) lens. Despite that, I got some really cool pics (with different lighting).

It took a long time to actually dry. I ended up just putting it in my laundry room for a couple days, but it was still moist. So, I took out the crystals and place them in my mortar for better air. Then, like Will mentioned, I used one of my lights to dry it completely. Later on that night, it was dry. 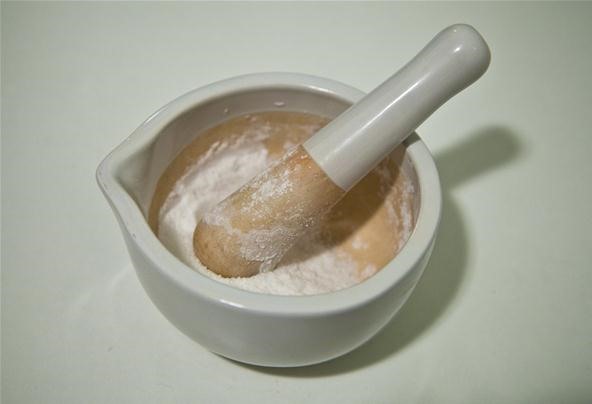 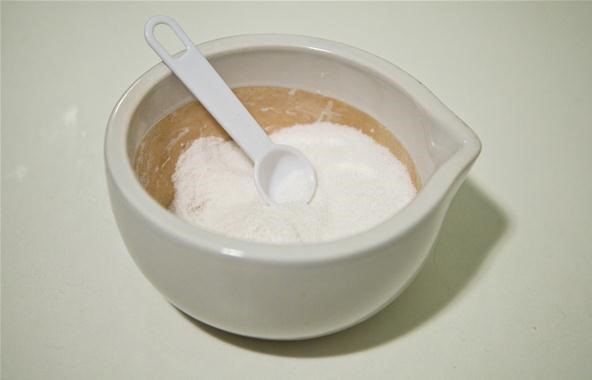 I mixed it up and stored for safe keeping, until I found somewhere to light it. 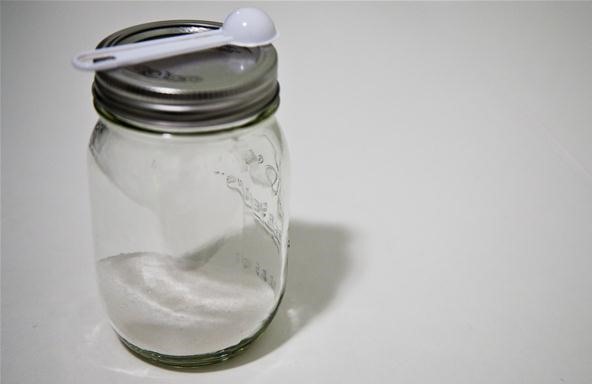 After I found a place to ignite the mixture, I used a junk metal candle holder to keep the ground from scorching. Seeing as this was my first batch, I just wanted to test it out, so there's no cool lines of powder, just one big blob of powder being ignited with my piezo lighter. Check out the video below for three different burn tests. I was surprised at just how sweet the reaction was... and how sweet it smelled.

After hearing rumors of it being hard to light, this test showed that it does indeed catch fire easily with a normal lighter. I was afraid I'd have to buy a torch or something. And just so you can see what happens afterwards, here's a few pictures of the blobs of burnt powder mix and scorched candle tray.

Next time I might go for some lines, so I can get some cool tracking shots.

Now, who else wants to show off their homemade "gunpowder". Strut your stuff on the community corkboard (like I just did). Light it up like in my video or try putting it in a smoke bomb, but either way, show us!

Just make sure you stay safe. Take all necessary precautions while doing any chemistry-related experiments.