Jet engines combine oxygen from the surrounding air with on-board fuel to burn at very high temperatures and create thrust in the direction of the flame. Rockets, which we will learn about in a later post, are similar but carry oxygen internally and can therefore function in space!

Contrary to popular belief, jet engines are not hard to make. In just a few minutes, you will be on your way to starting your own personal NASA program! It all begins with the glass jar jet engine! 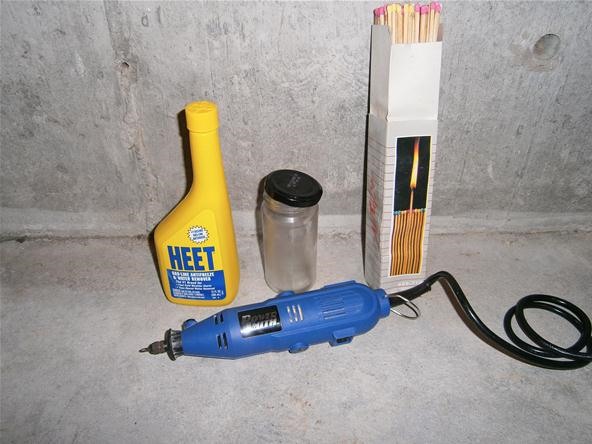 Long matches will keep you a safe distance from the flame.

Step 1 Set Up the Lid

Begin by removing the screw-on lid from the glass jar and placing it onto a piece of junk wood, cardboard, or something else you don't mind drilling a hole into. 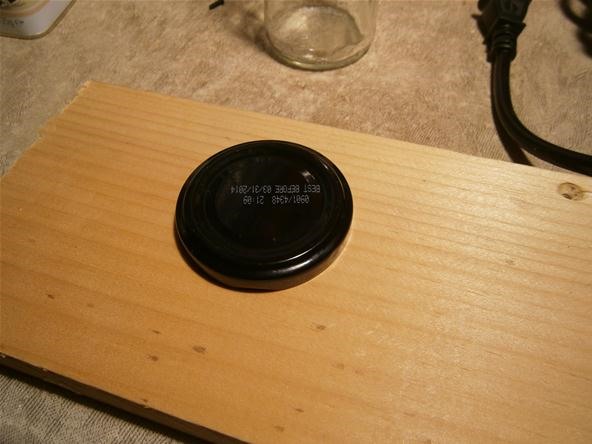 The wood will stop the drill from scratching the table, too.

Drill a small hole at the center of the cap. It's better to start out really small than too large. Later on, you can experiment with different hole sizes to see how they affect the performance of your jar jet engine. 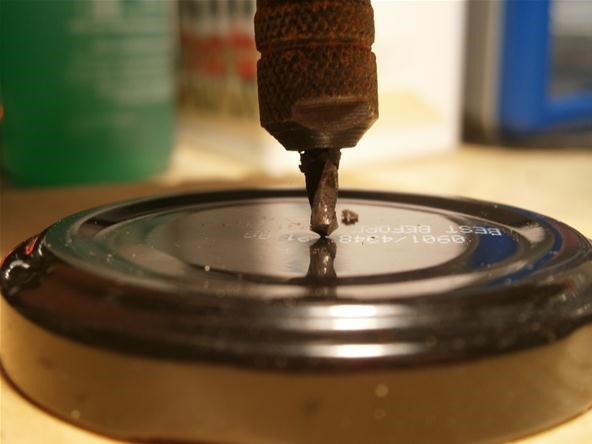 If you don't have a drill, a hammer and nail will work fine.

Place your jar in the freezer for a few minutes. This will decrease the likelihood of your glass jar cracking due to overheating. 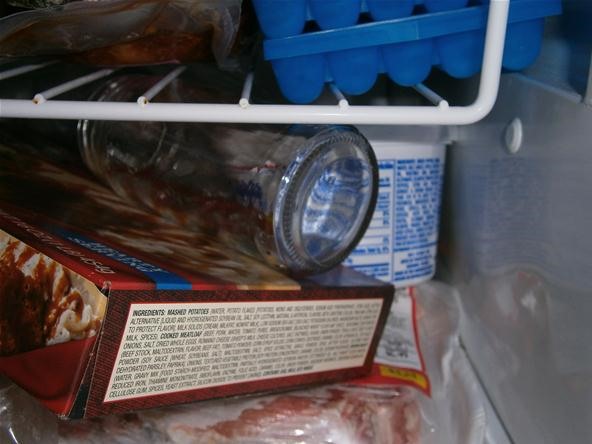 Wait until the glass frosts, then remove the jar from the freezer.

Place the frosty glass jar in a safe, non-flammable environment. I set mine on the shell of an old VCR that I sacrificed to the scavenging gods. 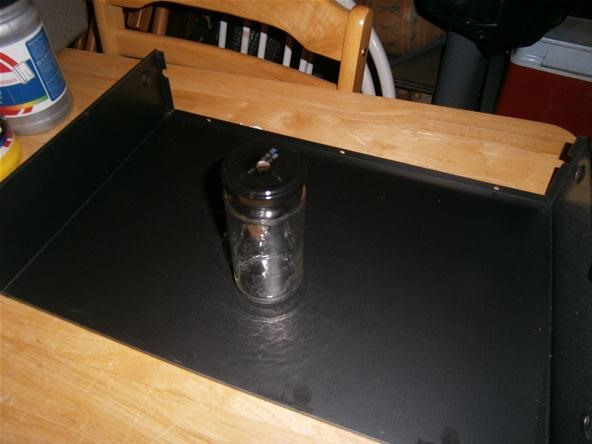 The metal shell will keep heat and broken glass off of the table.

Step 5 Pour In the Methanol

Pour a tiny bit of methanol into the jar, as shown in the following photo. 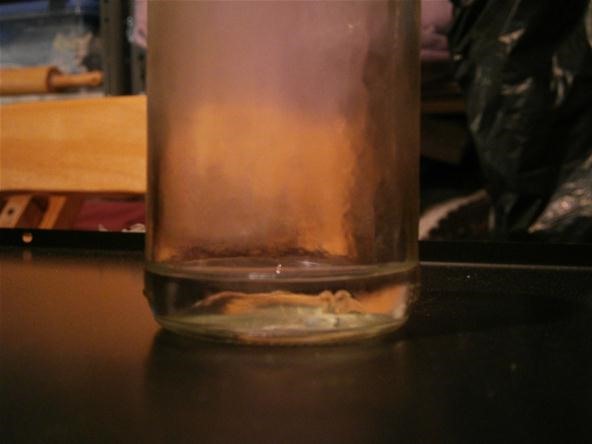 Just a spoonful or two will be enough.

Make sure it is on really tight.

Attach the match to the end of your ruler or stick. Light the match away from the jar. With the match extended away from your body, bring the flame to the opening in the cap.

Part of the methanol that's trapped inside the glass jar floats around as vapor. This vapor flows toward the opening at the top of the jar. When the match flame meets the vapor, it ignites the entire vapor cloud.

The combustion consumes the oxygen in the jar, while more oxygen is sucked in through the lid. This results in the upside-down tornado shape of the jet flame.

After the first run, the inside of the cap was burned in a circular pattern! If you look closely, you will see that the burn is slightly lopsided. The hole is likely off center, so the escaping fire oscillates around the opening. 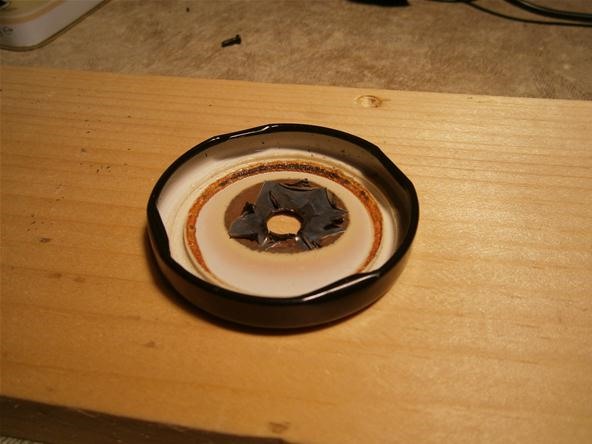 The constant heat caused this jar to break after three uses. 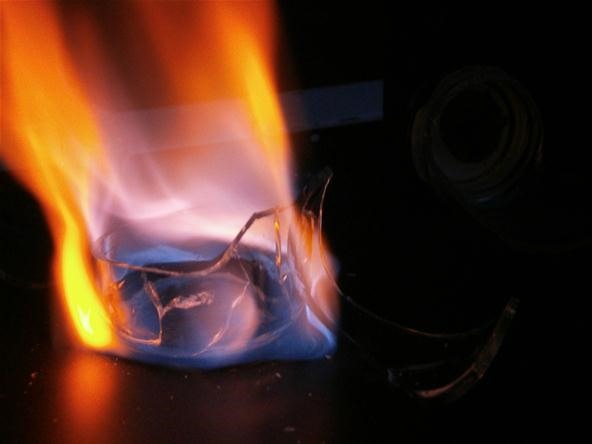 Now, try making your own miniature jam jet engine at home and share your experience with the community! Make sure to post any pictures and videos that you take of your valveless jet engine onto the community corkboard, and if you have any questions, ask them below in the comments or in the forum. I am always here to help make your science dreams a reality.

This looks like a fun (and not too dangerous) project. How big do you think the hole in the lid would have to be for this not to work? And would a pin-sized hole be too small?

Generally the hole should be about the size of a penny, depending on the size of the jar. Love the article! I made a giant metal one similar to this, that could run continuously off propane. They're so loud!

Pin-sized is too small. Mine was less than half an inch across. The really fun part is to experiment with different sized holes and see how much flame you get.

Hmm... ideas of using a larger jar and making a flame tornado!

That sounds amazing. Be safe and take video!

Yes, please do and post a video of it! :) Excellent article, look forward to future ones! (The flames look like they are going super fast, it reminds me of watching clouds with the speed turned way up? haha)

Glad you liked it! If you try it yourself please share with us in the forums =)

Yup! You are correct. Get the Heet. It's less than two dollars at my local hardware store.

I do not understand this : 'The hole is likely off center, so the escaping fire oscillates around the opening.' --> Why does the hole have to be in the center of the lid? Why does it have to be symmetrical? What's the physics behind it? Thanks